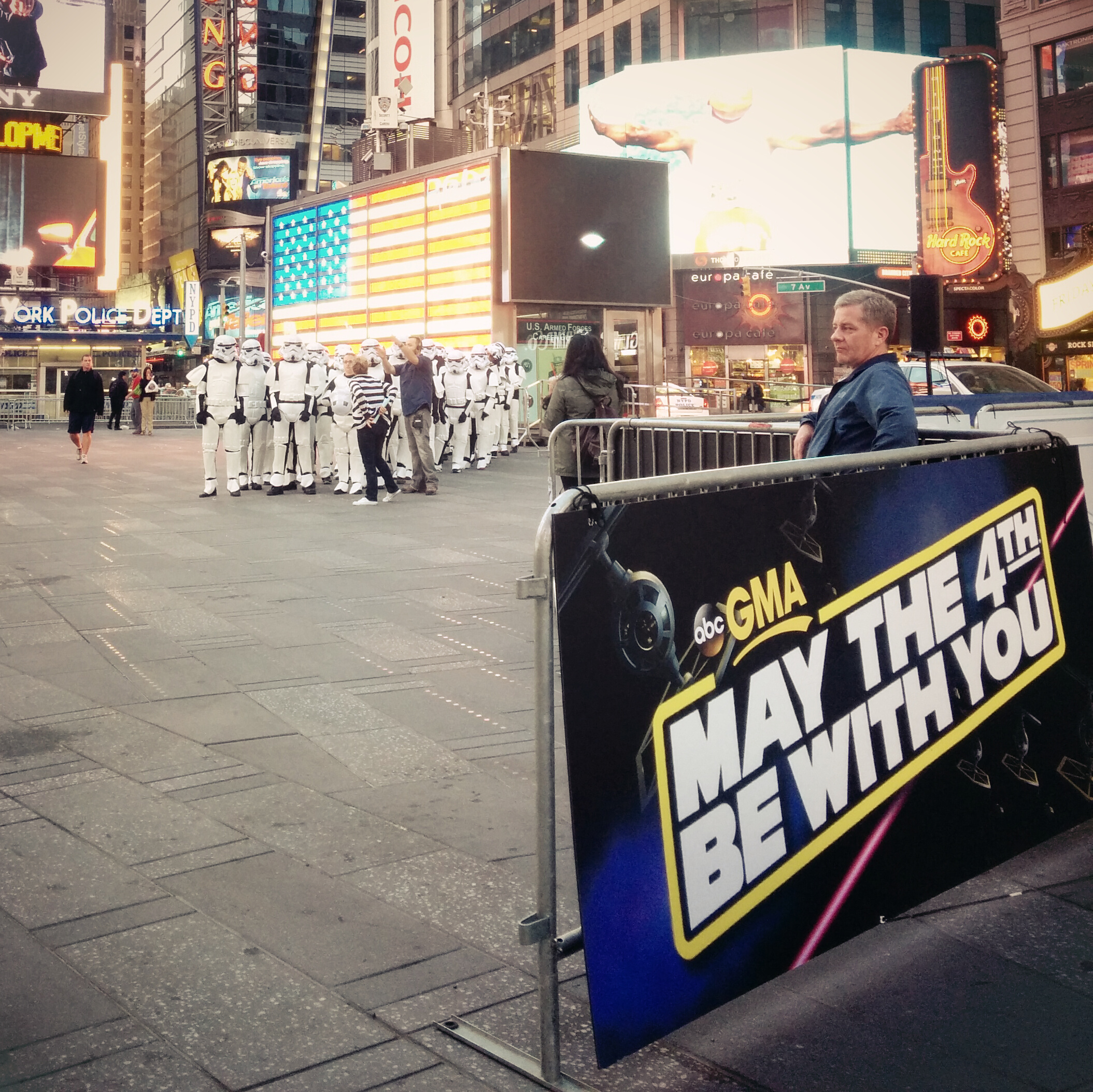 When I woke up this morning, I was not much of a Star Wars fan because I had not seen the movies. I had seen parts of the newer ones, but I didn’t remember them or know what was going on. So today was quite the Star Wars Day.

It all began with visiting Good Morning America. There were a lot of people in costume and exciting buzz about the new movie. It was fun to go and feel the excitement people have for these films, even if I didn’t understand it at the time. 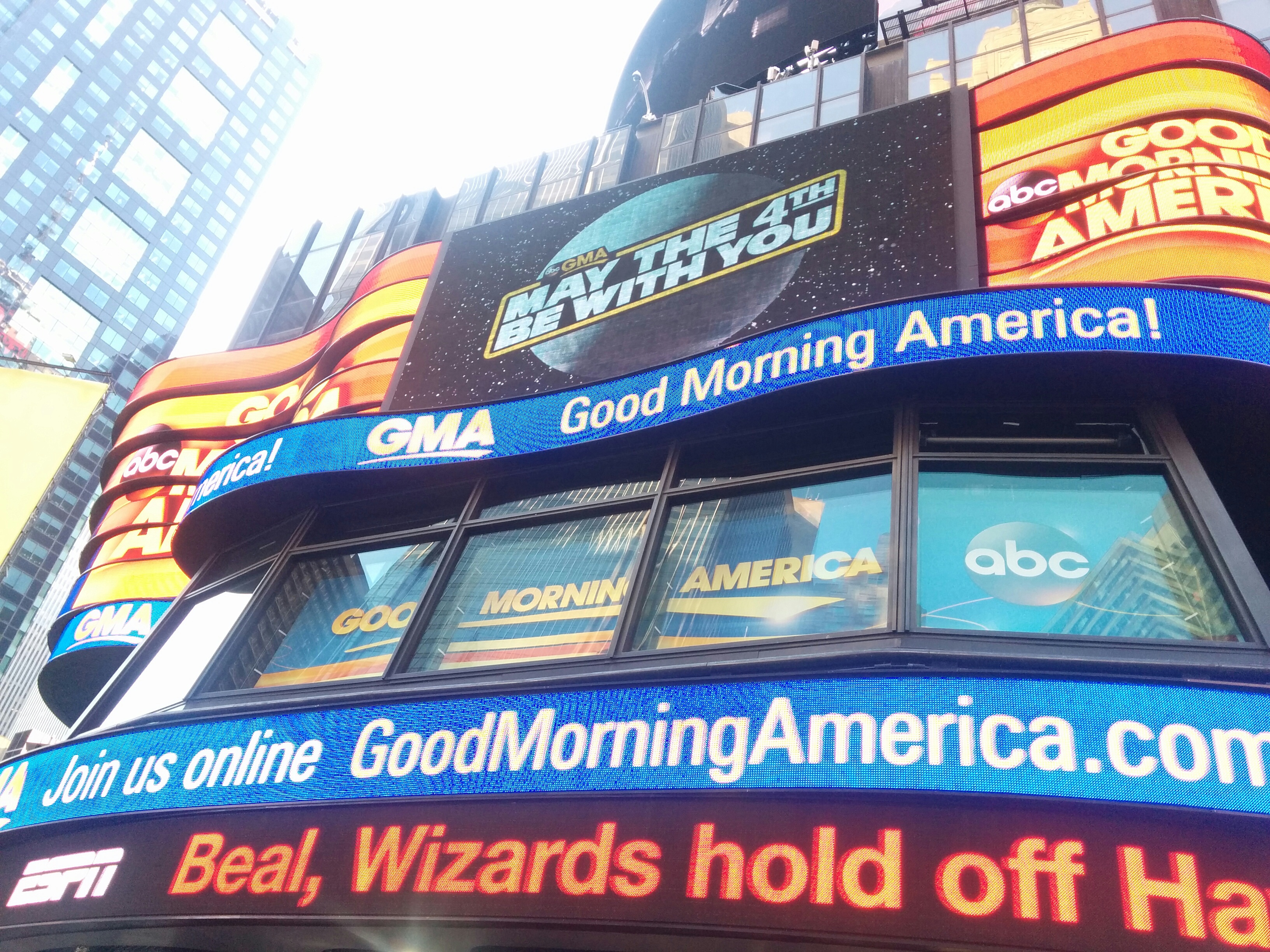 It was a really pretty morning in Times Square. And before people started showing up to work, it was deserted and really nice. New York City in the morning is lovely. I should get out to see it more often.

When I got back to my apartment, it was time for a movie marathon. It was difficult for me to get copies of these movies. There is nowhere to rent them to stream and my library didn’t have copies. They recently became available to purchase on Google Play or Amazon Prime, but why would I spent almost $100 on movies that I haven’t even seen? I finally found a friend that had all the DVD’s and she was generous enough to let me borrow them for this special day. Really, Jen is the hero of the day. 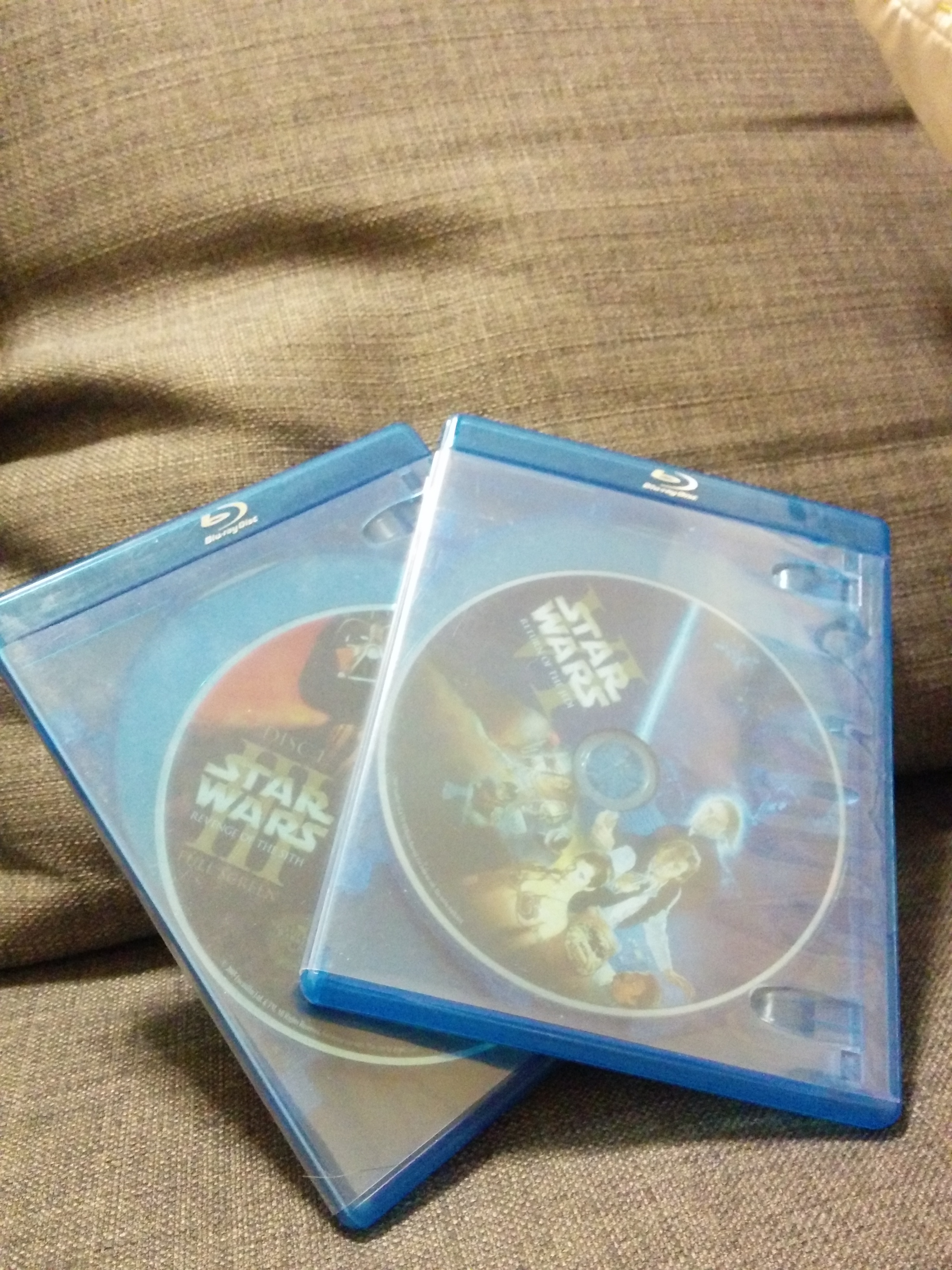 I was doing a bit of research on what order I should watch the films in. All of my friends seemed very adamant that I watch them in order of release, but I think that’s more because of their ideals than because it was the best way. I don’t have the same issues with the newer movies that other people have.

So I found this post, and without reading in it’s entirety due to spoilers, I decided how I wanted to do this. The Machete Order is to watch IV, V, II, III, VI. I am stubborn though. I wanted to watch all of them. So I’ve decided to do IV, V, I, II, III, VI.

I had other obligations today (being an adult), so I didn’t watch 6 Star Wars movies. I did pretty good though. I watched through Episode II.

I do understand the problems people have with the newer movies. The acting is pretty bad and Jar Jar Binks makes me want to throw my TV out the window. I like the special effects though. There is a lot more light saber action and the story is still a good one, even if the execution doesn’t live up to it.

I’ve had a great time today watching these movies (see my tweets here). I haven’t finished them all yet, and the story isn’t even finished, but I end today as a fan. Here are some general thoughts I’ve had today, or things I was surprised about.

This day was awesome. I’m not kidding when I say that purchasing these movies is now on my To Do List. No wonder people are obsessed with them. How sad that it took me so long.

I blame my dad for this whole thing. We watched Star Trek a lot, but never Star Wars. When I confronted him about it he said, “I only saw them in the theater.” My dad saw those movies in the theater and never saw them again. That is nuts. Especially if you know my dad.

I’m excited for the new movie coming out too!